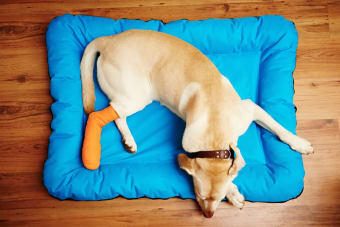 If your dog suffers a ruptured ligament in their knee, TTA surgery may be suggested to repair it. Today, our Long Beach vets discuss TTA surgery in dogs and how it can fix a dog's knee.

TTA is the abbreviation for tibial tuberosity advancement. This a surgical procedure used to treat cranial (or anterior) cruciate ligament rupture in the knee joints of dogs.

It involves cutting the top of the shin bone (the tibia), moving it forward, and stabilizing it in its new position in one of several ways.

The TTA procedure is more commonly performed in dogs with a steep tibial plateau or angle of the top part of the tibia.

A special orthopedic spacer is screwed into the space between the two sections of bone to slide the front part of the lower knee forward and up. This moves the patellar ligament into better alignment, removing some of the abnormal sliding movement.

A bone plate is then attached to hold the front section of the tibia in the proper position. Changing the alignment, this forces that cause the femur to slip back when the CCL is torn instead move straight down the tibia, resulting in less shearing force or instability.

Currently, most veterinary surgeons consider TTA to be one of the preferred treatments for larger, more active dogs.

However, although there is the potential for complications, in the majority of patients selected to undergo TTA surgery, knee pain is reduced and the function of the limb is markedly improved.

A small percentage of dogs that didn’t have injured cartilage at the time of TTA surgery go on to tear it at a later date. In this event, a sudden increase in lameness usually develops and a second operation (keyhole or arthroscopic) is necessary to remove the torn piece of cartilage.

Healing from TTA surgery is generally pretty fast for your pet. Most dogs will begin walking on their leg within 24 hours after surgery.

At about 2 weeks, most dogs are putting moderate to complete amounts of weight on the affected leg.

By 10 weeks, most dogs do not have an appreciable limp or gait abnormality. At 4 months postoperatively, the majority of dogs can begin walking and playing normally, with only the most stressful activities restricted.

Within 6 months, most dogs will resume normal physical activity.

Pain management during and after stifle (knee) surgery is critical, so be sure to give all medications as prescribed and use them until they are gone. Physical rehabilitation post-operatively will speed healing. Ask your veterinarian about incorporating rehabilitation into your dog's recovery plan.

The most common complication after TTA surgery is infection. Your dog will need several examinations and radiographs (X-rays) afterward to ensure that the area is healing properly.

Is your dog showing signs of a knee injury? Contact our Long Beach vets to see if TTA surgery is right for your pup.

Spring Animal Hospital is accepting new patients! Our experienced vets are passionate about the health of Long Beach companion animals. Get in touch today to book your pet's first appointment.